Amy Catches One Bigger Than Her 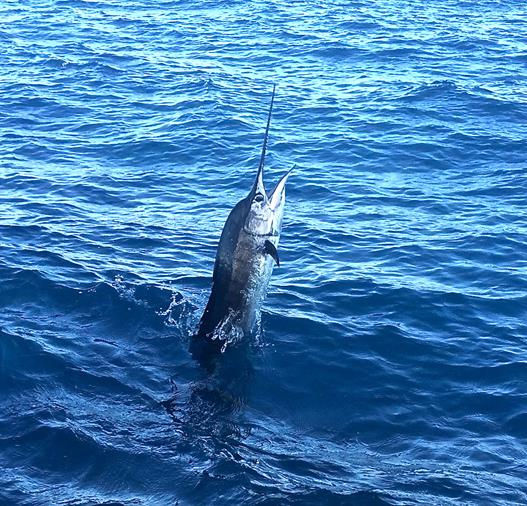 We were on a big convention trip with anglers from all over the country. Most of them had never been fishing before and were happy to just be out on the boat. One angler, Amy, had different aspirations and was admit about catching something bigger than she was. There had been some sailfish around, so that seemed like the best shot at something big. Immediately upon reaching the edge, we found a nice size mahi. The fish traveled to the south at a high rate of speed as I followed it from my perch in the tower. Our crew readied a live bait and threw it in front of the traveling mahi. Moments after the frisky live bait hit the water, the hungry mahi raced over and devoured our offering. We were off to a good start. From there it was time to set up the fishing kites and wait for a big sailfish. Unfortunately that is exactly what we did, waited and waited and waited! Trying as hard as we possibly could, luck was not on our side and the team could not buy a bite. It looked as if Amy was not going to get her wish. Time was running out on us. Finally I spotted a sailfish on the surface and maneuvered the L&H to the spot. Seconds later, the right kite bait got very nervous, a sure sign that a hungry predator was close by. Then the dark inky color of a big sail deep below the waters surface appeared. Right middle I shouted as the fish pounced on the bait. Somehow the fish ate the bait off the hook. Watch the other baits I ordered, as I knew the fish did not feel the sting of the hook and we could very well get another shot. Seconds later the big sail reappeared on another bait and this time everything went our way! White water flew as the big angry sailfish tore up the surface of the cobalt blue water. Amy battled the fish relentlessly as I did everything in my power to get the L&H close to her quarry. After a long hard fight, the exhausted fish was alongside the boat. Amy had done it! Being around five foot tall she was dwarfed by the seven and a half foot sailfish! Exactly what she wanted, a fish bigger than her! Everyone was happy for her and it was another great day of charter fishing aboard the L&H!