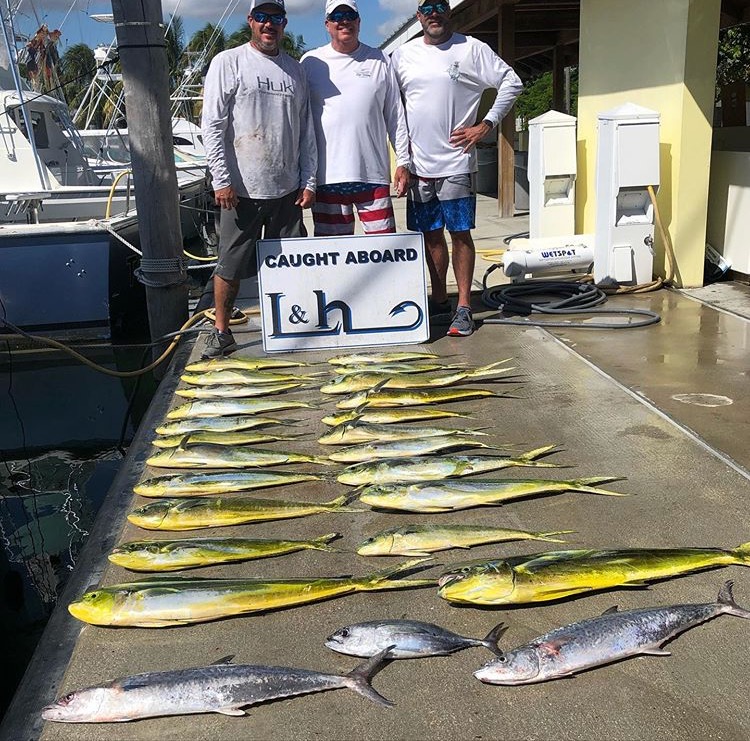 James Casto has been fishing for a long time and has fished all over the world! He was referred to us by our friends at LMR tackle. We got an early start and headed out to the bait spot. James and his friends showed their experience with the bait fishing and put plenty of frisky baits into the bait tank in short order. A quick stop at the edge of the reef produced a small tuna and a couple of kingfish. When the reef slowed down it was time to head offshore into the gulf stream. With the baits and teasers out, the L&H motored into the calm, clear, cobalt blue waters of the gulf stream. It wasn’t long until I spotted a nice current edge with sea weed and it looked very promising. As soon as we began going down the edge, we started picking at nice sized mahi. Mostly one at a time. Then we found what we were looking for, a nice stick amongst the sea weed with a lot of bait around it. One after another, mahi mahi began to show up and once again James and his team showed their experience. With several nice fish all going separate ways, the anglers did what they had to do to eliminate tangles and put the fish in the boat. When the dust settled, the crew had put nearly all the mahis from the school into our icy fish hold without a problem. By now it was time to head for the dock and everyone on board was happy with the results from our half day fishing trip!