An L&H Type Of Day For Gus And His Guys 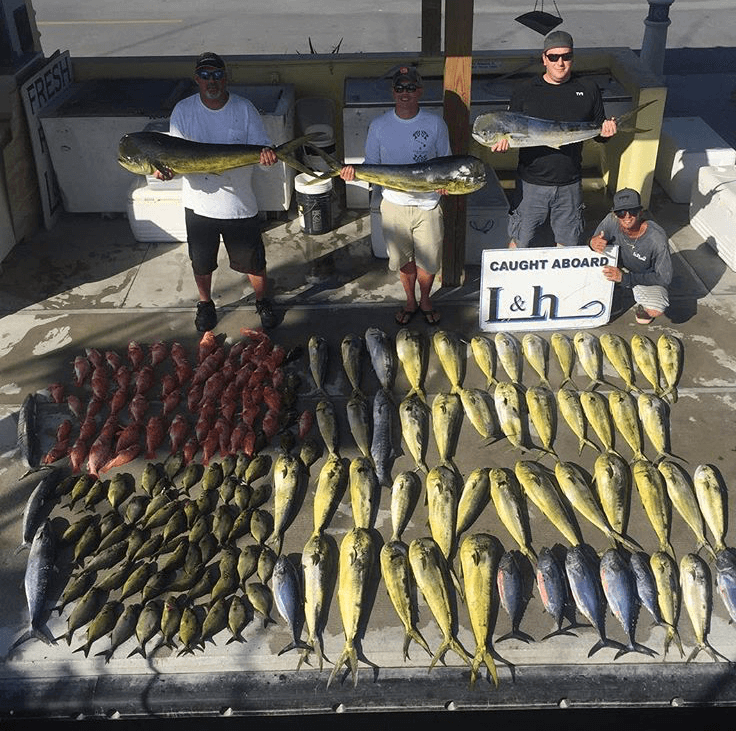 Gus and a couple friends booked the L&H for a full day of Miami charter fishing! The South Florida weather was beautiful as we steamed offshore at sunrise. Our plan was to try the edge first then work our way from there later in the day. As soon as the L&H crossed over the edge, the lines were set and they got bit immediately! This was a great start to the day as the sun was barely up over the horizon and our anglers were tied into hard fighting fish. The first fish to come in were feisty bonita. The action continued as the morning wore on much to the delight of the captain and crew! When the dust settled, the quick stop on the reef, netted us several bonitos and a few nice sized kingfish! Now it was time to head offshore to the gulf stream and try our luck further out. Only a few miles from the reef edge, the left short went off and we were once again hooked up! This time a nice wahoo was at the end of the line and after a nice fight, the fish was gaffed and put in the fish box! Time to get going again and see what else the day had to offer. From my perch in the tuna tower I could see a big weed line off in the distance! Excitement and anticipation were the feelings I had as we headed for the weed line! It looked so good, there had to be some hungry mahi in our near future. All the conditions were right and it did not take long to spot the first mahi! A frisky live bait was presented to the colorful mahi as it cruised under the sea weed looking for an easy meal. The mahi raced over and engulfed the hapless bait fish and we were once again hooked up! Then up from the depths more and more fish started showing up. Soon Gus and the gang were all busy hooking, fighting and eventually landing nice sized mahi mahi! The weed line was full of fish and we had it all to ourselves! I slowly cruised the L&H down the line finding fish almost at will! All of the fish we were seeing were nice sized and every once in a while a big fish would come into the mix! The crew was working together like a well oiled machine! With perfect conditions for sight fishing it was almost too easy! After a couple hours I was sure we were close to the limit and decided to stop the boat and count the fish to make sure we did not have too many! We pulled all of the mahi out of our icy hold and just as we expected we had our limit of ten fish per person! Now it was time to try for something else! Since we were in twelve hundred feet of water, some deep dropping was the perfect tactic to try next! The crew quickly shifted gears and got out our deep drop rigs. By the time everything was set up we reached the first spot! As our anglers relaxed in the air conditioned cabin, the lines were sent down. Today was one of those days where everything that we tried seemed to work and the deep water bottom fishing proved to be no different. Immediately after the baits it the bottom we started getting bites. This time it would be the brightly colored rose fish that would fall victim to our baited hooks. Several drops were made and in short order the team added nearly fifty rosies to our nearly full fish box! By now it was starting to get late and time to head home. As I steered towards home, a big school of blackjacks caught my eye. Why not have some fun with light tackle, I thought to myself, as I maneuvered into position. The guys broke out the little rods and artificial lures and put a hurting on the scrappy fish. We use these fish for a variety of things and even though we caught a bunch of them very quickly, none would go to waste! With the box full and our anglers exhausted it was yet another awesome day of charter fishing off Miami aboard the L&H!