Blue Marlin and Limit of Mahi with Lucky Noel 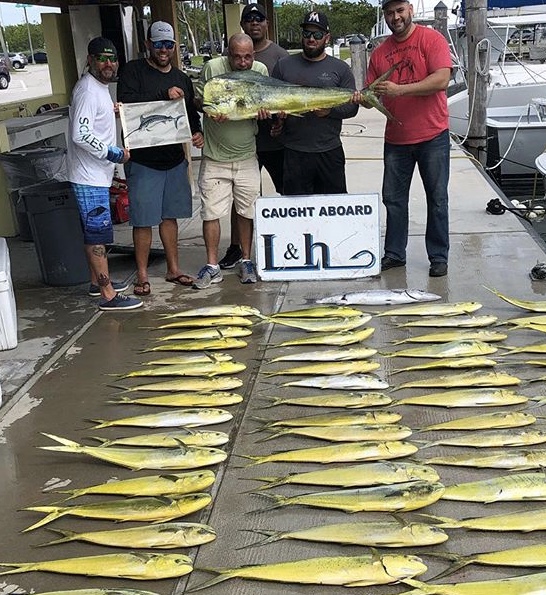 Noel has been fishing with us for a while and always seems to have good luck and today would be no different. After a quick stop at the bait spot and loading up with fresh baits the L&H headed into the gulf stream to do some Miami Charter Fishing. After a short run, the crew set the spread and we began searching for offshore gamefish. Suddenly I spotted several mahi swimming below the cobalt blue water of the gulf stream. "Throw out here!" I ordered as the crew cast live baits with pin point accuracy and without hesitation. Noel and his crew sprang into action and began working on the fish. Like a well oiled machine, our team fished the school and before long had over twenty-five mahis in the box. As we resumed the hunt out anglers cooled off in the L&H's air conditioned salon as the others scanned the beautiful South Florida waters for more signs of fish. By mid morning we had enjoyed consistent action with more dolphin both trolling as well as sight fishing. Just before noon, I spotted a truly large school of mahi and just like before the gang sprang into action. All of the sudden a big bull dolphin swam up looking for something to eat. We delivered a perfect cast to the big fish and we hooked up immediately. By now several other boats were close and trying to get in on our school. I decided to chase after the bull and let the school swim off. After a tough battle, the angler boated the big bull dolphin as well as the three more we needed for a six man limit. With sore arms for everyone and a limit of mahi in our icy hold, it was time to head inshore and try some wreck fishing. When we arrived at the spot a live blue runner was sent down tho the bottom in 210' near an old shipwreck. Somehow the bait got hung up and the crew broke it free. From my perch in the tower high above the waters surface, I could see a big black shape follow the bait up to the surface. BLUE MARLIN! I quickly yelled as the crew quickly cut the lead off. The marlin did a half circle and engulfed the hapless blue runner right in front of our eyes! I leaned hard on the throttles and raced the L&H in reverse to get the leader and a quick release on the jumping blue marlin. The leader hit the tip and everyone went crazy as the lit up fish swam away to fight another day. We had just released a blue marlin while wreck fishing off Miami! What a day!! A blue marlin and limit of mahi to 35lbs for Noel and his group! It was another great day of Miami Charter Fishing!!