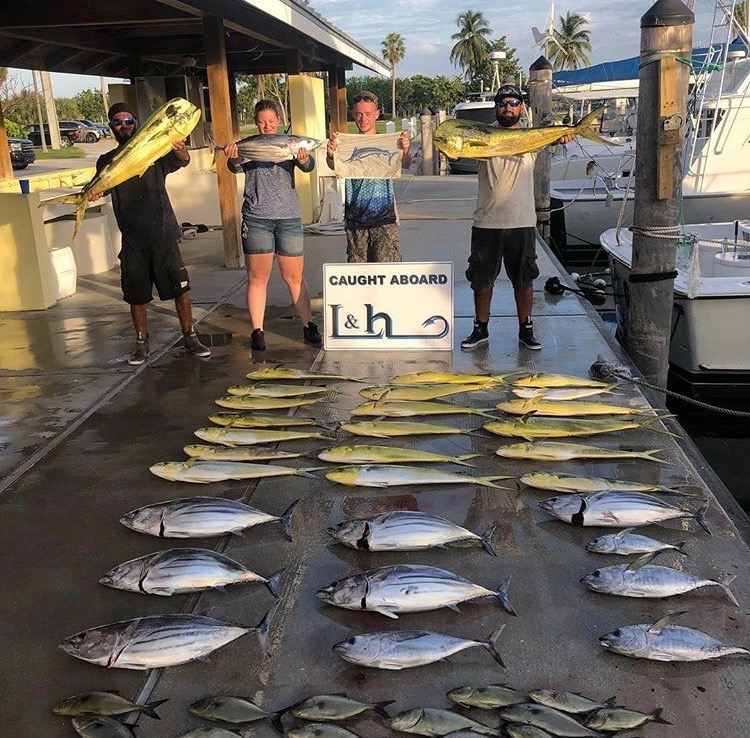 We had couple from overseas on the L&H to do some Miami Fishing. The weather was beautiful. With flat calm seas and cobalt blue water our custom 46' Hatteras seemed as if it was gliding effortlessly into the gulf stream. Off in the distance I could see birds circling and diving with fish crashing below. "TUNA!!", I yelled to the crew as we approached the feeding gamefish. Without hesitation the lines were set and they were bit immediately! The couple sprang into action and began catching nice size tuna one after another. Doubles and triple headers of the gamefish were the norm rather than the exception and our Bullbuster mono was doing the trick, even with heavy drag. In short order, our team put a dozen nice tuna in the L&H's icy hold. From there there crew reset the spread and we resumed our hunt. From my perch in the tower, high above the surface of the water I spotted a big fish closing in on the right teaser! "BLUE MARLIN!!!", I shouted with enthusiasm. the big blue marlin charged the teaser and lunged after it time and time again with each attempt at the teaser, more aggressive than the previous! With perfect light and crystal clear blue water the now angry blue marlin was completely lit up, giving me (and everyone else on the boat) one of the most incredible sights I have ever seen off of Miami! The fish teased all the way in and continued lunging after the teaser, even after it was hanging from the rigger! The crew presented the pitch bait with precision and accuracy and the hungry blue marlin engulfed it. I put the L&H in reverse and the Cummins engines came to life as we charged backwards after the greyhounding marlin. Our angler did an incredible job as we chased the fish all over the ocean. Finally after several incredible series of jumps and some other maneuvers we had the 300lb marlin at boat side for a clean release. It was truly an incredible catch from start to finish and one I won't soon forget! We continued fishing and before long started catching nice mahi-mahi. The mahi action remained consistent and before days end we added a bunch to the fish box including a couple of 25lb bulls! It was an unforgettable day and just goes to show that you never know what will happen when you step on board the L&H for a day of Miami Charter Fishing!!