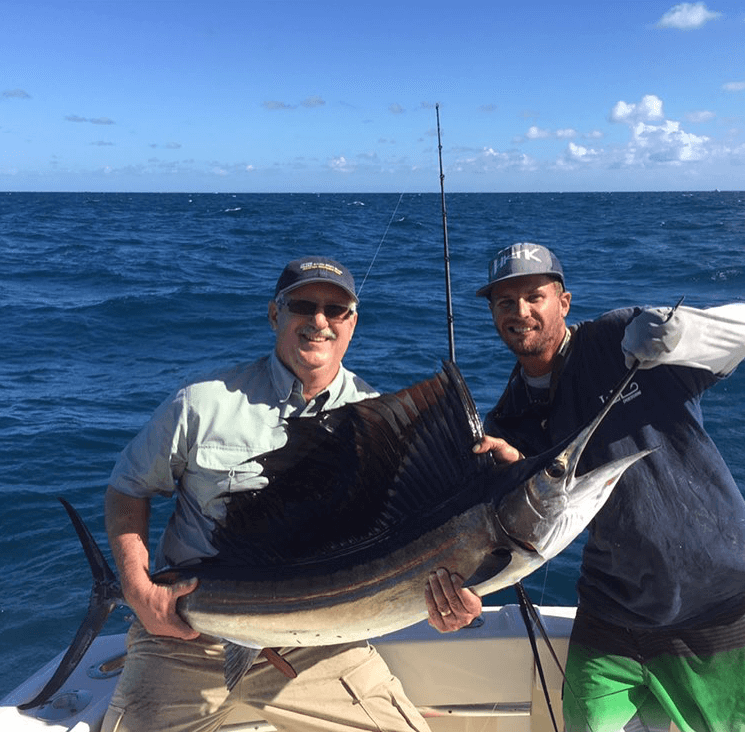 It was a windy, fall, afternoon half day and our trip was only four hours. With some frisky live baits swimming happily in the large circulating bait well, I decided to head straight to the edge and get right to it. As the boat slowed down just past the edge of the reef, the baits went out and we were fishing in no time! Our guests for the afternoon were from the mid-west and were happy to catch anything. Suddenly a decent sized mahi charged in and ate out long rigger bait. I made a turn to go back through the area and another good sized mahi mahi came racing in on my bridge rod. The fish swam behind the skipping bait for a few seconds before committing to it and we were on again. Happy with our quick start, we continued to work the area. This time when the rod bent over it was from the pull of a good sized kingfish. Customers, crew and captain alike were enjoying the immediate success as the L&H pounded the spot. Suddenly I saw a sailfish closing in on my bait dragging from the one rod I was fishing from the fly bridge. The fish tried the bait, but missed. Not to be deterred, the hungry sail came from behind with even more determination. When the sailfish grabbed the rigged, natural bait I dropped back for several seconds to make sure the feeding billfish had time to swallow the bait. Upon feeling the sting of our sharp hook, the beautiful sail took to the air and raced for the horizon. Everyone grabbed a rod and began clearing lines as fast as possible so we could begin to chase the fleeing billfish that was now several hundred yards away! After a tough battle we had the fish along side the boat for a few quick pictures and a healthy release. Quickly the lines were set back out and the hunt for gamefish resumed. Out in the deep, a frigate bird swooped down to the waters surface, a sure sign that a feeding gamefish was not far behind. When we reached the spot where the frigate was diving, I could see a couple sailfish chasing bait only a few feet below the waters surface. Maneuvering the L&H into position, and presenting a live bait was just what the doctor ordered and one of the hungry sailfish casually swam up and engulfed the hapless live bait. By now everyone knew the drill and quickly cleared the other lines so we could chase the fish down. Shortly thereafter we had our second sail of the day alongside the L&H for a quick release. With only a little time left, it was time to start working our way back in. Just before taking the lines out of the water and heading for the marina, I spotted yet another sailfish chasing bait on the surface. For the third time in only a few hours, we were hooked up to a brilliantly colored, majestic sailfish! This fish determined to get away, greyhounded at a feverish pace across the clear, blue water! The L&H performed that familiar reverse rumble as we backed down in hot pursuit. Finally after covering a lot of ground we caught up to the now exhausted sail and made another successful release. On the way home our home, our clients enjoyed the air conditioned salon as they reflected on another great day of sport fishing off Miami aboard the L&H!