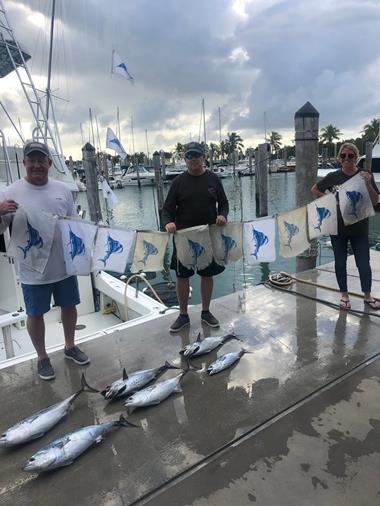 We had a group of clients from out of town aboard the L&H to do some Miami Charter Fishing. After catching some live bait in Biscayne Bay it was time to head offshore into the gulf stream and try some kite fishing. Shortly after setting the baits, two sailfish appeared and were both hooked and jumping behind the custom 46' Hatteras, L&H. Both of our anglers did great, making for two successful sailfish releases to start the day! Later on that morning the team added some bonitas and another sailfish to the tally before the current died. With deteriorating conditions the captain headed the boat up the coast toward Key Biscayne. It was looking very promising and as we slowed the boat and set the baits back out. Strong north current and cobalt blue water were the conditions we hoped for and I knew more sails would rise up soon! Over the next hour and a half we caught 2 more double header sails and a single giving us a total of 8 for the day so far. All of the sudden a pack of sails came up behind the boat. In short order we were hooked to a quad! Unfortunately 2 of the fish got away but we managed to catch the other 2 and ended the day with an awesome 10 sailfish releases while charter fishing off of Miami Beach aboard the L&H.