Home  ›  Our Blog  ›  Fun Morning With The Lee Marks Family 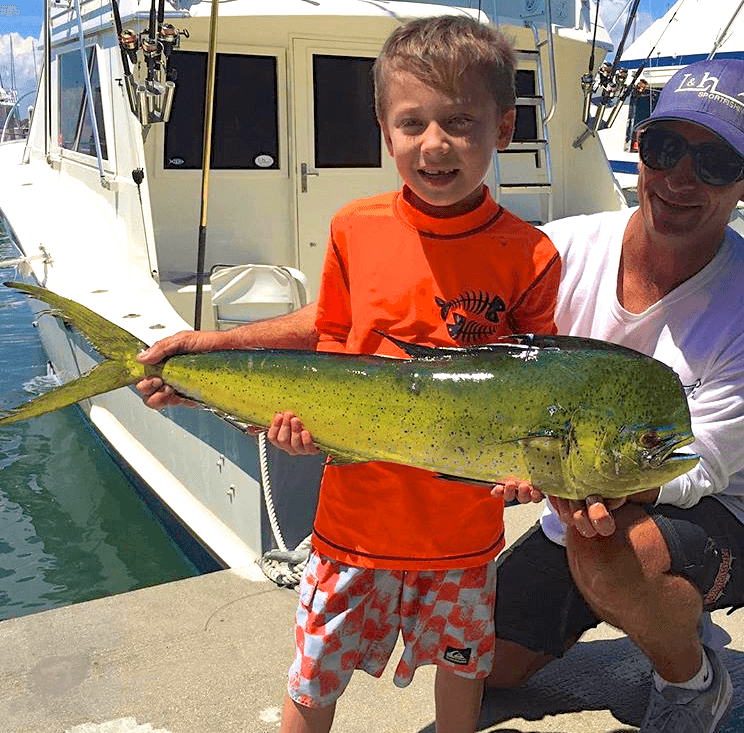 Our friend Lee Marks booked the L&H for a half day of Miami charter fishing. Lee, his three boys, and his wife came aboard one nice summer morning! We have known the Marks family for a long time and they have always been good to us so it was important to make sure his family was well taken care of! It was a short trip to the bait spot and the Marks boys sprung into action. The boys were obviously accomplished bait fishermen and had plenty of frisky live baits in our circulating bait well in short order. It did not take long for the L&H to reach the gulf stream and start searching for pelagic game fish! As we worked our way further offshore, the conditions continued to improve. "Left rigger!" Someone shouted as the line came out of the clip and we were hooked up just like that. A nice mahi danced on the end of our Bullbuster fishing line as young Stefano battled the fish to boat side. With dinner in the fish box, we resumed our hunt and soon found another mahi for the boys. The patches of sea weed were teeming with life. Consistent action with good sized mahi kept smiles on every ones faces! A few hours into our trip, Hunter found himself hooked into a big rainbow runner. This fish was a strong fighter, but its excellent table fare would make the fight worth it. With the rainbow and a bunch of nice mahi in our icy hold, it was time to start making our way closer in. Then out of nowhere, I spotted a big mahi on the surface and had the boys get a live bait to the fish. The bait hit the water and immediately raced for cover in a piece of sea weed. Not to be deterred, the big, hungry mahi charged over and crashed into the weed trying to get the hapless bait fish. It was a beautiful sight to watch as the mahi made several attempts at the bait before finally plucking it from the sea weed. As soon as the fish felt hook it went airborne in an attempt to throw the hook. Then another big fish showed up, and was quickly hooked. Just like that, we had two big fish on and the both went in separate directions. The two boys battled the fish and after a little while, Hunter had his fish almost to gaff range. Just feet from gaff, the big mahi made one last jump and threw the hook. Unfortunately after a tough fight, the other mahi got away as well. Thats fishing, you win some and you lose some! The boys did not seem to mind and were happy to know that these fish would be waiting for them next time! We had a great ride back to the marina, where our crew took pictures of the catch and cut up a bunch of tasty filets for Lee and his family! It was a fun day and we look forward to fishing with these guys again soon!