Home  ›  Our Blog  ›  Great Morning Trip with The Briestra Family 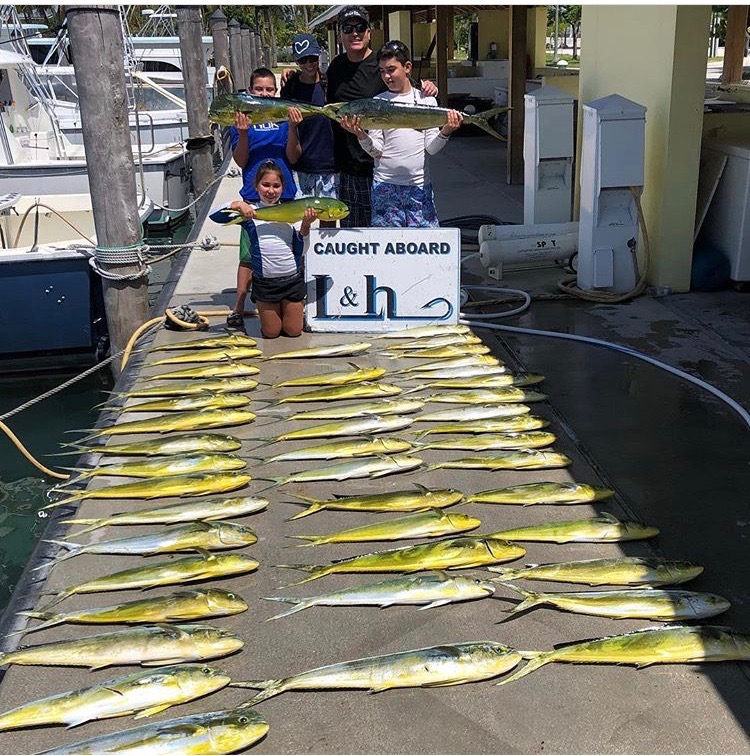 The Briestra Family has been fishing with us on the L&H for quite some time. We always look forward to seeing them and especially enjoy their oldest boy, Noah. Noah is always very excited to do some Miami fishing and he always sports his L&H t-shirt with pride. The weather was nice as the L&H cruised into the cobalt blue waters of the gulf stream. Once the fish finder read 1000 feet of water below us, the crew set the lines and we began to search for signs of life. It wasn't long before we found a nice weed edge. Several other boats had found the same edge and were running out in front of us. Ignoring the others, we continued trolling and searching to find the fish. Off in the distance I spotted a single tern circling and diving, a good sign of hungry gamefish below. We followed the bird for a while but as we got close it flew away. We continued toward the spot where the bird last was. Then a single flying fish jumped up off in the distance. I quickly steered the L&H toward the fleeing flyer and looked down into the water to see what had spooked the baitfish. "I got em!" I yelled to the crew, "get ready". It was a big school off nice sized mahi, migrating to the south. I can't believe everyone ran past these, I thought to myself as the team began casting out baits to the big school of fish. It was game on! Before long Ben and his family were all hooked to nice fish. Noah could hardly contain his excitement as he battled fish after fish to the boat and eventually to the L&H's large fishbox. Dad was firing out baits, hooking the fish, and passing the rods off to his family! It was such a pleasure to watch from my perch in the tower. With other boats complaining on the radio about no fish it became obvious we had made the right decision not to race down the edge! We stayed with the school for over and hour. Exhausted, Noah continued to reel in the mahi one after another! Even though he took a couple short breaks, Noah would be the one to put the lions share of fish into the icy hold! When the crew signaled to me that we were close to the limit, it was time to let the rest of the fish keep going and head the L&H toward shore. Ben and his crew retired to our air-conditioned cabin to cool off for the smooth ride back to the dock. Upon arrival at the marina we took some pictures of the catch and filleted up a bunch of mahi for Ben and his awesome family to enjoy! It was another awesome day of Miami Charter Fishing with our friends the Briestra Family aboard the L&H!