Home  ›  Our Blog  ›  Mahi And Tuna Action For The Thomasoz Family

Mahi And Tuna Action For The Thomasoz Family 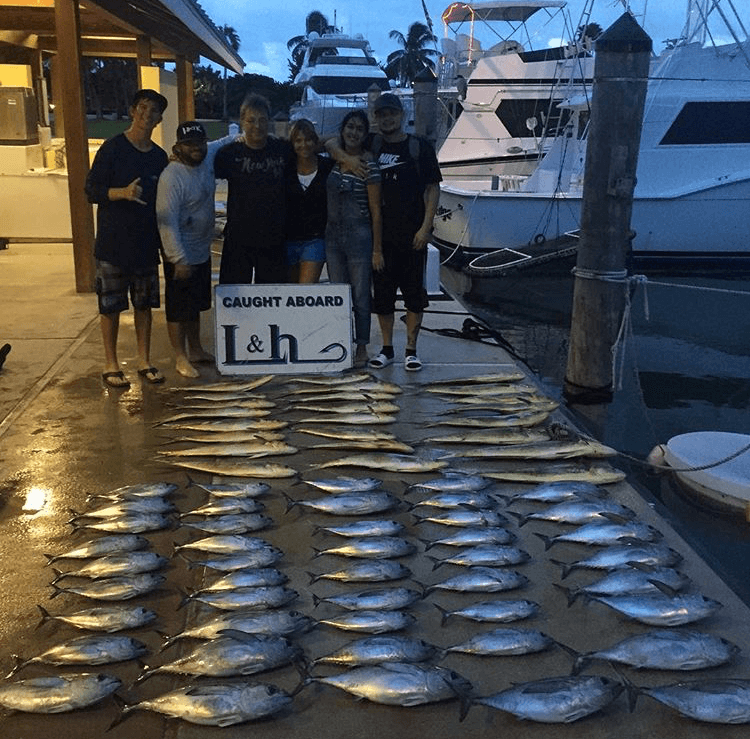 We had the Thomasoz family aboard the L&H for a full day of Miami charter fishing. Our plan was to catch a few live baits then get out to the edge and see what the day had in store. Bait came easily and in no time we crossed the edge and were greeted with good conditions. Without hesitation, the crew deployed the baits as the L&H slid comfortably over the clear, blue waters just offshore of Miami. Minutes later both long outrigger baits were inhaled by a pair of nice mahi mahi. After a short battle, both fish were boated and we resumed our search. As soon as everything was set back out, a pack of ravenous mahis crashed the party and reels screamed and more nice fish took to the air! This time four fish were hooked up and all anglers were busy doing battle. More fish began showing up and the talented crew wasted no time hooking them! For nearly twenty minutes, everyone stayed busy with nonstop mahi action. For most of the morning, the Thomasoz family enjoyed good success with nice sized mahi mahi, much to the delight of everyone on board! Around lunch time the skies grew darker as the weather began to deteriorate with the presence of an approaching front. Finally after putting thirty good sized mahis into our icy hold, they shut off. There was still plenty of time left in the trip and the crew continued to work hard and try and find more fish for the Thomasoz family. After switching up a few things and changing our methods just a little bit, we began getting bites once again! This time it was blackfin tuna that started coming in with consistency! Multiple hook ups were the norm rather than the exception and once again all four family members stayed busy fighting these strong fish with light tackle! As the afternoon wore on, the weather continued to get nastier. Storm after storm rolled through as the L&H continued fishing. It was in the middle of one of these rain storms that a sailfish charged in and ate one of the long outrigger baits. Unfortunately after a few jumps the fish spit the hook. By late afternoon the tunas were biting very good and it was just about one after the other! As soon as the lines were set, they were bit! Everyone was having so much fun that we all but forgot about the weather. The tuna fishing was as good as we had seen in a while so we hated to leave. Finally our team pulled the last fish over the rail and headed for the dock! It was a great day of fishing with mahi mahi and tuna action that had everyone sore from reeling, but very happy with coolers filled with tasty fillets for all to enjoy!