Home  ›  Our Blog  ›  Richmond Brothers Have A Busy Day

Richmond Brothers Have A Busy Day 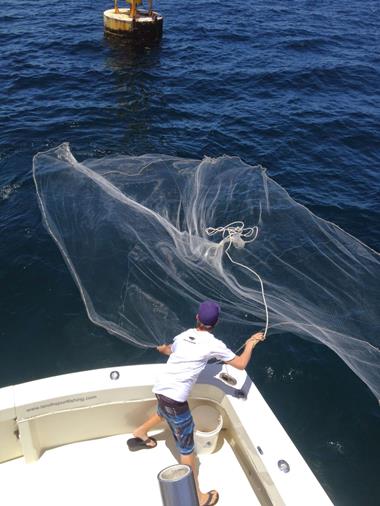 The Richmond brothers have been charter fishing off Key Biscayne before, but never on the L&H! We were excited to fish with three brothers and got an early start to what would be a great day of sportfishing on Miami's best charter boat. After loading up with bait we headed out to try the edge first. In the first hour of fishing the guys landed several bonita and a few kings. From there we started heading to the south. A friend on another boat told me he saw a big dolphin and there was a nice weed line so the boys started getting ready for mahi as we motored to the south. Soon we reached the area where I heard about the mahi, and started to search. A few minutes later we spotted a big bull dolphin swimming down the weed. It was very close to where my friend told me he was and it was similar in size to what he said so I was sure it was the same fish. We backed around chasing the acrobatic bull as our angler gained line at a feverish pace. Minutes later we gaffed the fish and once again resumed the hunt. A couple miles further I spotted a couple frigate birds working and this find would vault us into some excellent dolphin fishing. Before getting even remotely close to the birds we started catching fish. Within seconds the brothers were all hooked up to dolphin and would stay like that for a while. More and more fish continued to swim up as the group added more and more mahi to our icy hold. Around mid day the action started to slow down and we decided to go even farther south. I was sure the guys had never seen or caught a permit so we pushed inshore to give it a shot. We reached the area and looked around for a while without seeing anything. The conditions were not bad, but without seeing any fish I was just about to leave. Then, out of the corner of my eye, I spotted a truly large fish. The bait went out and the big, hungry permit raced over and engulfed it! And just like that we were on! Bullbuster line melted off the reel as we chased the angry fish in hot pursuit. As was the norm for the day, our angler did a great job and after an exciting battle had the exhausted fish in the boat!! We were so happy!!! The brothers were happy with the permit and and the crew was happy with the great weather and great fishing that we were enjoying!! By now we were pretty far from the dock and it was starting to get late so we started heading back. On our way home we added a nice cobia and a few more dolphin to finish up what was a fun and exciting day of fishing on Miami's Best Charter Boat the L&H!!!