Josu Gaubeka Has A Great Half Day Of Miami Charter Fishing 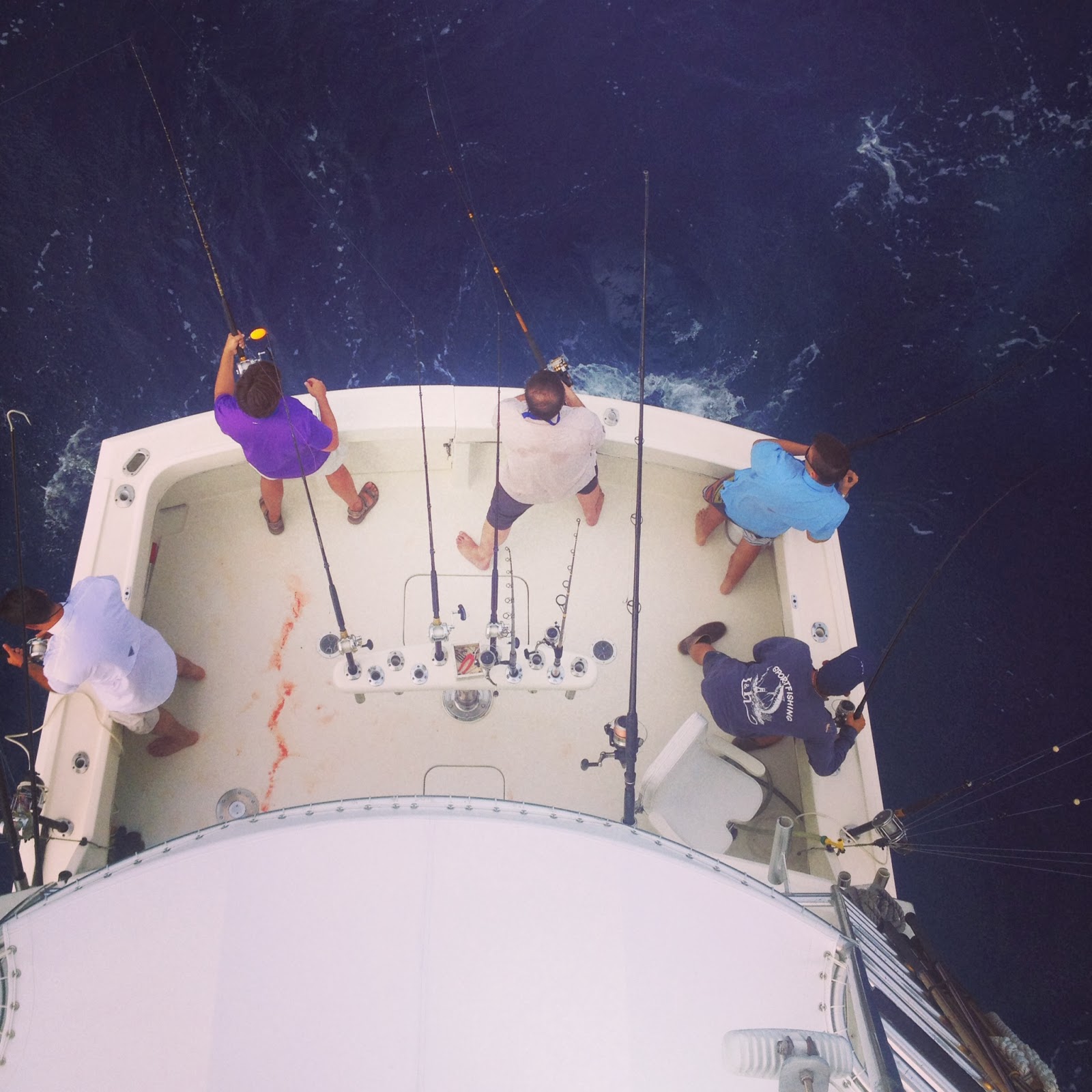 Our friend Josu, who has fished with us on Miami's best charter boat, the L&H, several times before was back out to do it again.  Josu often fishes with his family, but today he was joined by some business associates.  After catching some live bait we decided to start the day off doing some kite fishing.  Only a few miles off Key Biscayne, there was nice blue water and a light current.  While we were setting out the baits, a hungry sailfish came and ate the right middle kite bait, then two nice sized dolphin engulfed the two other live baits dangling from our fishing kite!  While all of this was happening, another feisty Atlantic sailfish attacked the left middle kite bait and just seconds later a large dolphin rushed in to devour the only bait left in the water!  Just like that, our group of four fishermen were hooked up to five big fish, all at the same time!  I maneuvered the L&H over to the first big mahi and Jim gaffed the colorful fish and put it in the fish box.  Then minutes later the second mahi came over the rail and shortly after that the third mahi joined his companions in our icy hold!  Now it was time to concentrate on the sailfish.  I backed our charter boat toward the frisky billfish and before long both fish were released unharmed to fight another day!   It was a terrific start to Josu's day of charter fishing and the L&H was just getting warmed up! Jim quickly reset the kite baits and almost as fast as the baits were going out, they were getting eaten by hungry gamefish!  Two more sailfish were released and a few more good sized mahi were brought aboard.  Then Josu got a big bite on the deep line and everyone knew that this was going to be something different!  After a good fight, our angler hauled a beautiful twelve pound mutton snapper into the boat!  It was beginning to feel like one of those days where we could do nothing wrong.  Another multiple hook up yielded a few nice size tuna to our growing catch and as Jim put the last stubborn, sushi quality tuna in the box some more mahi mahi swam up.  The customers quickly started casting out live baits on our custom leeward rods with fin-nor spinning reels and in the blink of an eye there were mahis jumping everywhere.  We were able to catch most of the fish in the school and now it was almost time to head back to Crandon Park Marina.  We agreed to reset the baits one last time and give it a few more minutes.  As luck would have it, we found ourselves hooked up to another triple header. This time our group of fishermen found themselves battling three different species. Another nice mahi came aboard, the fifth sailfish of the day was successfully released and our friend Josu put the icing on the cake when he reeled in a gorgeous grouper that had taken a live bait suspended just off the bottom!  I continued to ride the tower on the way home searching for just one more fish.  Just seconds before turning the L&H west and heading for home I spotted two big mahi swimming in only forty feet of water.  Like clockwork, two baits went out and both fish were hooked up!  After some acrobatic jumps by the wonderful mahi, both fish were gaffed and added to our nearly full fish box!  Everyone onboard enjoyed the smooth, calm ride back to the marina.  When we arrived at the dock, with sailfish release flags flying high, Jim and I took some photos of our guests with the days catch.  After that we cleaned and packaged a bunch of fish for our guests to take with them!  I was truly a great half day of Miami charter fishing for Josu and friends and just another example of why the L&H is Miami's best charter boat!