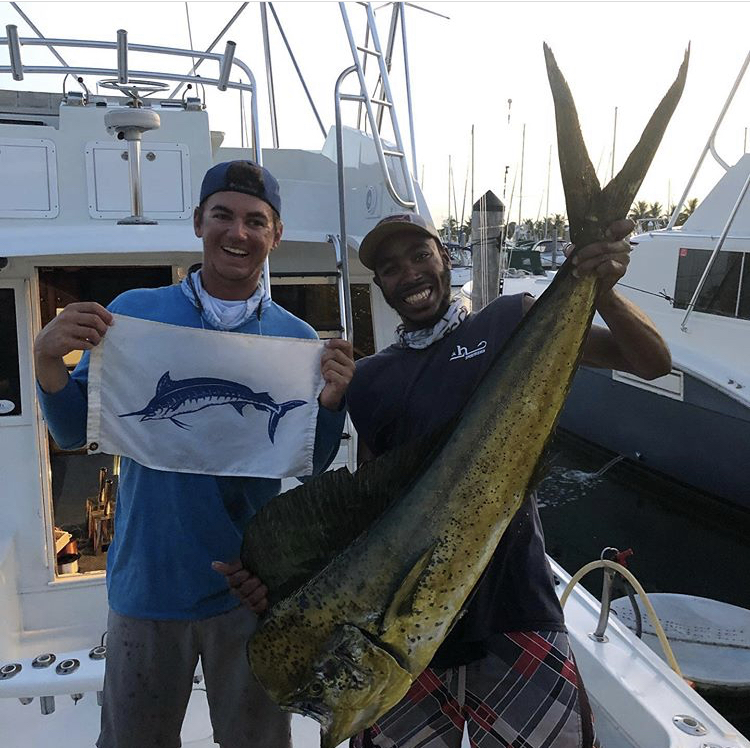 We had enjoyed a long but successful day of offshore fishing with Derrick and his wife. The fish were far out but our efforts were rewarded with a limit of mahi-mahi up to 25lbs in our icy hold. We were trolling home faster than normal (around 10 knots). The sun was getting low as I drove west toward the dock, in the tower it was almost blinding me. Every once in a while I would put my back to the sun and watch the teasers. In 800' of water, straight off of Key Biscayne, with my eye on the lures, a very big Blue Marlin came out of nowhere and stuck her head out of the water trying to eat the left teaser! It was a sight I will not soon forget! "Oh my!" I mumbled to myself, in sheer disbelief of what just happened. It was then that a little voice in my head said 'you better start pulling that teaser'. Since we were going faster than normal, the teaser was much further back than it normally is. First thing to do was slow the boat down and begin to tease the fish in. Faced with the task of keeping the teaser away from the hungry and now determined marlin, I pulled the teaser by hand with everything I had as the marlin continued to take shots at the lure. Somehow the blue marlin never got the teaser and continued to tease in all the way to the boat. The boys let the pitch out and I remember looking at the bait wondering if it was going to be enough to get the attention of such a big fish! The thought had no sooner crossed my mind when the hungry blue erupted out of the water and devoured the bait. After a quick drop back the reel was engaged and we were "ON"! We chased the fish hard in reverse and were able to get the leader and fishing to boat side in short order. Once we got an official release the big blue jumped once under the outrigger and we set her free. It was a truly awesome day with an amazing blue marlin for Derrick!