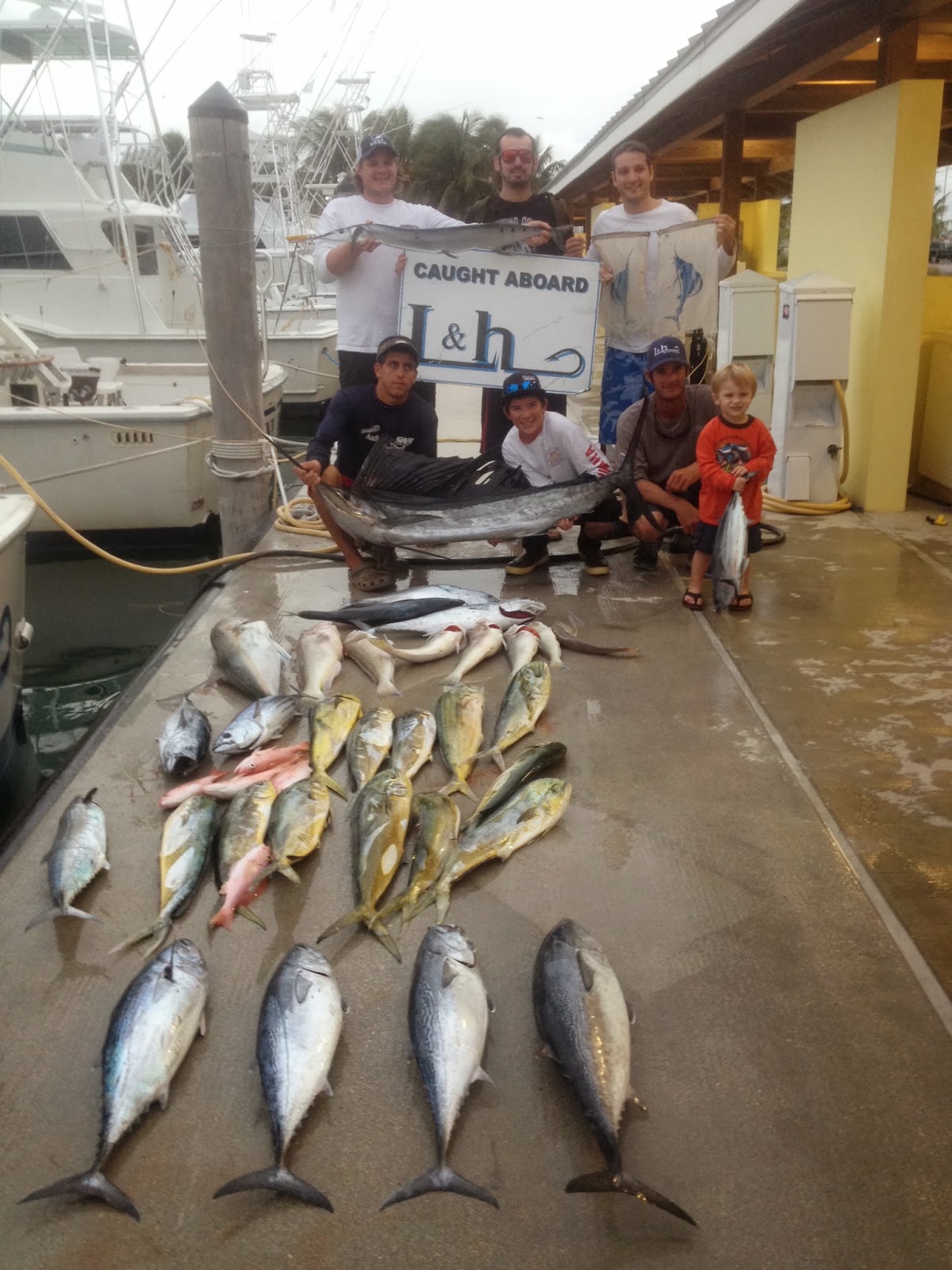 If I had to make a nickname for our good friend Tom it would be the "Lucky Fisherman"!  He is from Bolivia, but whenever he is in town, Tom likes to go charter fishing on the L&H!  Today he took a few of his buddies along to help with the angling duties.  Tom likes to try different fishing methods throughout the day and that was our plan of action.  The bait fishing was good and while the guys were catching them, Tom stayed busy catching nice sized spanish mackeral!  When we hit the edge the water looked good and it did not take long to start getting bites.  At first bonitos, then a nice king and a few cudas.  It seemed as if we could hardly get the baits out fast enough before they were eaten.  A nice big sailfish grabbed one of the kite baits, took off jumping and stripped off a bunch of the bullbuster kite vis 20 pound mono that we were using!  After the initial jumps, the fish went down and refused to come up.  After a forty minute battle we found out the reason why.  The sailfish had become tail wrapped and came up to the boat backwards and lifeless.  This was not a sight any of us wanted to see, but instead of letting it rot on the sea floor we decided to take the legal size fish and have the meat smoked.  Way to the south I could see a frigate bird hovering in the same area and decided to investigate.  As we got closer, I spotted some nice mahi under the bird and the boys began casting live baits to the fish.  In no time we had mahi jumping all over and more fish began to show up.  We were in the middle of a pack of boats and everyone seemed to be watching as the L&H pulled nice fish over the rail at a feverish pace!  After boating twenty or so of the great eating mahi the bite slowed so we put the kites back out.  Unfortunately no more action so it was time to try something else.  There was a rocky ledge a few miles away and that would be our next stop.  Tom and his friends dropped cut bait to the bottom and started catching nice vermillion and yellow-eye snapper and even a decent sized grouper.  While this was going on we fished a couple live baits on the surface and added a couple more mahi to our growing tally!  One of the snappers came up bitten in half and Tom dropped it back attached to a wire leader with a big hook to catch the culprit!  Seconds later the rod bent over and he got a good fight out of an angry black tip shark that we would later release unharmed!  After fishing for a while at that spot we moved offshore to try our luck with golden tile fish.  The first spot produced a few nice tiles that were now resting in our icy hold!  There was another spot a few miles north and on the way we trolled a few artificial lures!  Less than a quarter mile from our next fishin hole, two rods bent over and line peeled off the reels!  The fish stayed down deep and I was sure we had a double header of tuna!  My guess was correct and a few minutes later both tuna were successfully gaffed and put in the box.  The tilefish were biting at the spot and it didn't take long to finish up the limit.  It was time to start trolling home, but when you fish on Miami's Charter Boat  the day is not over until the last rope is on securing the boat to the dock!  Today was a great example!  Just before putting the boat on plane and running for home, I spotted a sailfish free jumping and raced to get in position to bait the sail.  I slowed the boat and baits went out.  Seconds later two fish rose to the baits and just like that we were fighting a double header sailfish.  It was a fun fight and Tom got great pictures of the fish before we released both of them in great condition to fight another day!  It was another action packed day of sportfishing with our good buddy Tom!