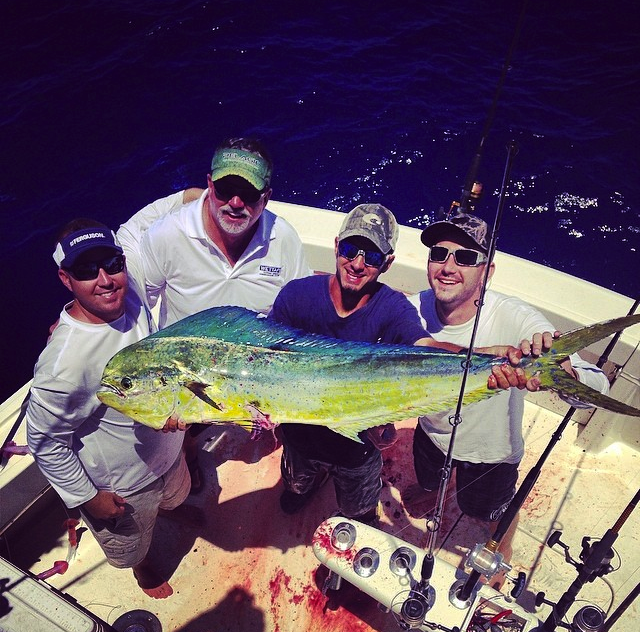 I have been fishing with the Bradley family on the L&H for the past twenty years!  The Bradley children have grown up in front of my eyes.  They booked us to fish the UCA Dolphin Tournament out of Ocean Reef. It was a lot of work to get ready. We had to catch bait a head of time and run down in the dark, but we were happy to put forth the extra effort. After a very early start we made it to Ocean Reef (before light), picked up the Bradleys and headed offshore. The day started out with us catching a few fish in shallow, but since we were ahead of most of the other boats I decided to keep going out.  After spending a good while way offshore, in the deep, without much to show for ourselves, I decided to come in closer.  Around noon things started picking up as we started catching fish. At first mostly schoolies, with a few nicer fish mixed in. Dave got us on the board with the first qualifier and that would get us headed in the right direction. Shortly after catching a few more small fish, we spotted a nice piece of debris. As I maneuvered closer to the debris we could see a big dolphin laying close to it. The mahi was sporting a shiny lure on one side of its mouth as it had been hooked and lost by someone else!  Nonetheless when we threw our bait out there and it was happy to see it!!!  The unlucky dolphin chased the bait all over, but was having great difficulty catching its meal.  I feared our bait might become tangled in the leader already hanging from the dolphins mouth and pull off. Our angler hooked the fish, but I was not sure where or how good so I instructed him to use light drag! I hoped we could get the fish quick, before it realized what happened. We backed around chasing the big dolphin and had it only feet away from gaff several times. The fish finally went down, but after some strong persuasion came back he to the surface. That is where we raced back and gaffed our prize!!!! Everyone went crazy!!! We knew this fish would be hard to beat! It was a great feeling! On the way home the crew got a few more fish but it was at the weigh in that we found our dolphin would turn out to be the tournament winner!